Dissatisfaction: A Talk with Marzia Faggin

Recently two Houston critics published reviews of Marzia Faggin’s Dissatisfaction exhibition at d.m. allison art, which can be seen through March 2, and if I invoke them, it’s because they are informative. Devon Britt-Darby, writing for Arts & Culture Magazine, considered Faggin’s thirteen wall mounted three-dimensional panels to be a continuation of the work she showed at Nau-haus Art in 2011, which he described as “life-size painted cast-plaster still lifes of potentially addictive pills like Lithium, Xanax and Adderall, which she juxtaposed with equally convincing replicas of equally addictive chocolates, cookies and other sugary snacks.” Faggin’s new work, according to Britt-Darby, “keeps the same intimate, life-size scale, but ups the ante both conceptually and formally. Candies, some half-eaten; pills; and snuffed-out cigarettes now sit along expertly cast and hand-painted copies of books from Faggin’s personal library. And what a library it is: Junky by William S. Burroughs, Albert Camus’s The Stranger and Charles Bukowski’s Ham on Rye are among the volumes sharing real estate on what Faggin calls ‘details of a nightstand’ with scattered chocolates, capsules, and other bits of evidence of how the nightstand owner numbs or deflects his or her pain.”

Writing for the Houston Press, Abby Koenig described the objects on Faggin’s panels as those “one might find after a night of soul searching and debauchery,” and rightly associated the panels’ books with our yearning for meaning in life. The “hopelessness” that leads us to read Sartre, Burroughs and Bukowski, she suggested, explains our use of pills, booze, cigarettes and Kit Kat bars. The critic further noted how realistic the objects seem, “the details are so perfect; the rice crisps of the Krackel bar pop out of the plaster chocolate,” she wrote, which is precisely the reaction I had the first time I encountered one of Faggin’s panels of addictive pills at PG Contemporary in 2012.

Cumulatively the two critics provide a fine description of Faggin’s art. After talking to the artist I would like to add a tiny bit more. 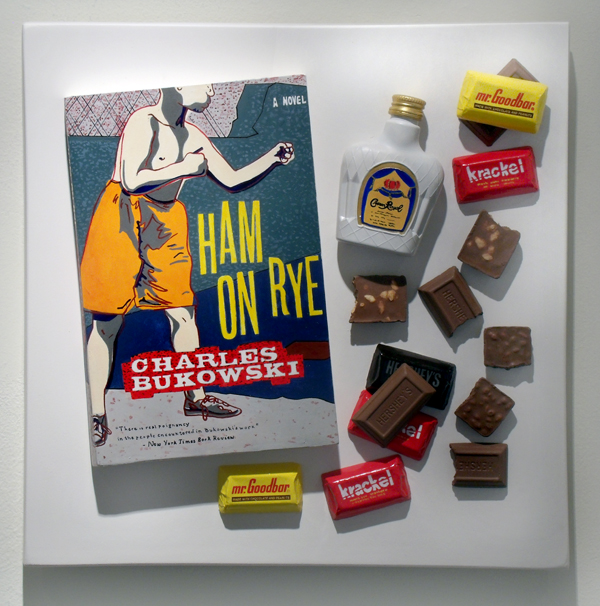 Marzia Faggin, Detail of a Night Stand: Ham on Rye, 2013, Hand painted plaster (Hydrocal),12 x 12
Virginia Billeaud Anderson: Let’s get the topic of addiction out of the way, for anyone who thinks your art is about addiction, or wonders if you have had personal experience with addiction, either yours, family or friends.

Marzia Faggin: The art is not about addiction, it’s about existential angst, our need to understand human existence. I was thinking about what a lonely space a nightstand can be, the half-eaten chocolates, and other objects speak of “dissatisfaction.” I have been smoking cigarettes since I was 13 and have quit at least 25 times, the longest stretch without being over a year when I was pregnant and nursing. Addiction to anything can be miserable and I empathize. Effects on the mind and body vary, but addiction can bring suffering and self loathing. I have friends without any addictions, friends who are addicts, and some are former addicts. The most common addiction among my friends is food.

VBA: Briefly describe the process of making casts – do you construct a mold from the real object, how is it done?

MF: When I began working I often incorporated pre-fabricated molds along with the original molds. For “Dissatisfaction” I constructed molds for everything except the art’s base, which I cast from a 12″ x 12″ pre-fabricated tile mold. I use a two-part silicone to make a mold of the objects, cast from real objects, and pour plaster into the molds. It’s not a complicated process and is similar to baking. At first you follow the recipe, then you learn to eyeball the ingredients.

Collaboration with my brother Eric Faggin brought me to this. In early 2010 we worked together on a piece called Natura Morta for the group showMaterial and deStructure, curated by Zoya Tommy at PG Contemporary Gallery, which is now called Zoya Tommy Contemporary Gallery. We made a cast concrete frame above a bed of grass with flowers. When water was sprayed on the frame, the inscription Natura Morta, (“Still Life” in Italian) appeared. While Eric worked on the concrete frame, I experimented with materials to make the flowers, searched the Internet for materials and molds, eventually trying latex, alginate, putty, silicone, baking molds, as well as various types of plaster. About the time I decided to use Permastone, the artist Richard Soler suggested I use Hydrocal because it’s lighter and whiter.

Two of my paintings in Zoya’s show caught the attention of the critic Robert Boyd, who contacted me a few months later and asked me to be part of an exhibition he was curating for the Freneticore Theater Fringe Festival. The 15 plaster wall hangings I made represented my beginning in this art form. 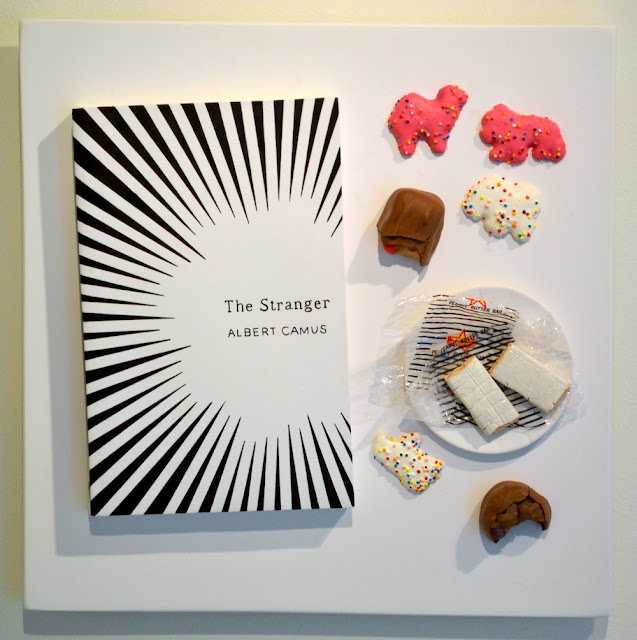 VBA: Do you sketch or design the composition before you create each panel?

MF: No, I don’t sketch or design the compositions. I’m usually unsure about arrangement until I’ve completed the individual elements. It’s like having a bunch of puzzle pieces that can be re-arranged, until I’m satisfied that the results communicate what I have in mind. For Dissatisfaction, I knew which books I would include, and also which objects – candy, cigarettes – would be “details of a nightstand,” but not the arrangement of the panels.

VBA: Are the “real” candy, pills, books or cigarettes in front of you to guide you?

MF: Yes, I have the “real” object in front of me as a guide, but I tend to make colors brighter, since I love color.

VBA: It must require precise brush handling to make plastic appear like real chocolate or Xanax. Is coloring a lengthy or tedious process? Make a comment about the brushes you use.

VBA: Why do you think you are drawn to such precise manipulation of materials?

MF: I love to work with my hands, I love to paint, and I’m a “bit” obsessive. Working in 3-D suits my skills, I can more effectively express myself.

VBA: In the past when you painted, I can’t help but wonder if you had an obsessively representational style. Did your paintings and print art forewarn of the work you are doing now?

MF: I don’t know if my style was representational, but my technique was one that lacked visible brush strokes. Precision and color are very important. When I printed with Dan Allison I applied paint to some of the prints. Drawing is not my forte. But combining computer images with traditional techniques suited me because with the computer, images become objects that can be endlessly moved around, similar to the 3-D objects I create, and move around until I’m satisfied the composition expresses what I’m feeling. 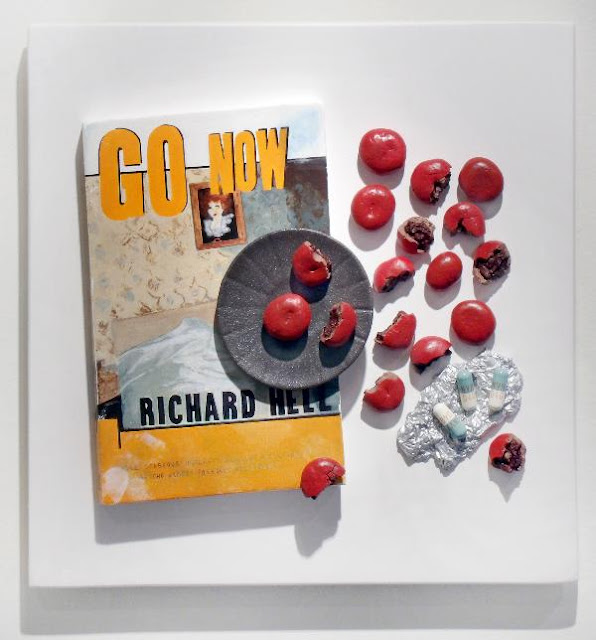 VBA: You were formally trained to manipulate images. According to your biographical material you studied graphic design at the Instituto Europeo Di Design in Milan, and paper conservation at Atelier Deltos di Simonetta Rosatelli. Surely experience in graphic design adds to this artistic expression, but do you think the chemistry you learned when studying paper conservation flavors the work with molds and cast plastic?

MF: Studying graphic design shaped me tremendously. It taught me to be precise and clean, even if I did not start out that way. The first months of school took some adjusting. I presented my exercises with fingerprints, smudges and creases on the paper and my classmates and professors were horrified. I didn’t even know how to use a ruler. The X-Acto knife was suicidal, which is funny, because now the ruler and X-Acto knife are as indispensable as my hands. School taught me precision and patience. Paper conservation is precise and repetitive, patience is key in that work.

VBA: Let’s talk about the books. In our previous discussion you acknowledged their existential significance, and said you choose books that “relay the darker element of suffering.” Rimbaud, Sartre and Burroughs are bleak, but Camus! I remember dissecting The Stranger in a graduate school seminar, and thinking how perfectly its opening lines convey the absurdity of our existing as mortals within an indifferent universe. In Camus’s story, which you reproduced as a nightstand element, existence is alienated from meaning. Comment on your connection to the literature. Did you “seriously” study this literature, in an academic environment?

MF: I did not “seriously” study literature. I like to read, but don’t consider myself well-read. I gravitate toward books that question life, and entertain the psychological motivations behind behavior, reasons for hypocrisy, criminality, injustice, loneliness, violence and suffering, as well as the search for truth. I like books that make me think.

I want to say this, even if it sounds corny or lame. Ever since I was a child I’ve been hoarding candy, the brighter the colors, the better, for me candy is one of the most beautiful things in the world. As an adult I don’t have to hide my candy, and I have it everywhere, which is strange because I don’t have much of a sweet tooth. This might seem to contradict my previous description of half-eaten chocolate bars as sad, but in my imagination chocolate absorbs sorrow, and candy seems to deflect it.

And this might be too corny, but in 2004 while living in Florence I decided to discontinue working as a graphic designer about the time of my first solo show in a bookstore called Libreria Martelli, organized by Paolo Giomi, the husband of Simonetta Rosatelli who operated Atelier Deltos where I apprenticed in paper conservation. My husband Manuel Terranova supported my decision to pursue a different career. We moved to Houston in 2006 when I was 7 months pregnant and the house we bought was near Texas Collaborative, Redbud and G Gallery, which turned out to be the best thing that could have happened. About a year after having my daughter Isabella, I started to harass Dan Mitchell Allison, Gus Kopriva, Max Boyd-Harrison, and Heidi Powell Prera, bothering them in their galleries, humiliating myself. Moral of the story: If I hadn’t moved to Houston, I might not have realized my goal of becoming an exhibiting artist. Houston has been incredibly supportive, people here gave me a chance, for which I will always be grateful, and particularly to Dan Mitchell Allison and Zoya Tommy for fostering my “career.”