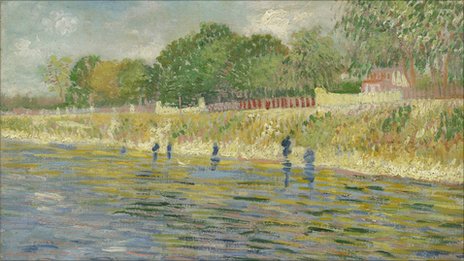 The Van Gogh paintings examined include Banks of the Seine

Scientists have identified why the bright yellows in some of Vincent van Gogh’s paintings have turned brown.

A complex chemical reaction is behind the deterioration of the works.

The finding is a first step to understanding how to stop some of the Dutch master’s most famous paintings from fading over time.

The results, published in the journal Analytical Chemistry, suggest shielding the affected paintings as much as possible from UV and sunlight.

Uncovering the secrets of the chemical reaction required the scientists to use an array of analytical tools.

These included the intense X-ray beams produced at the European Synchrotron Radiation Facility (ESRF), a world-leading centre for the study of the structure of materials in Grenoble, France.

Sunlight can penetrate only a few micrometres into the paint, but over this short distance, the researchers found it could trigger a hitherto unknown chemical reaction turning chrome yellow into brown pigments, altering the original composition.

The scientists employed a microscopic X-ray beam to reveal a complex chemical reaction taking place in the incredibly thin layer where the paint meets the varnish.

The vibrancy of new industrial pigments such as chrome yellow allowed van Gogh to achieve the intensity of, for example, his series of Sunflowers paintings.

He started to paint in these bright colours after leaving his native Holland for France where he became friends with artists who shared his new ideas about the use of colours.

The researchers found that a change in the oxidation state of the element chromium (from chromium 6 to chromium 3) was linked to the darkening of chrome yellow paint.

The X-ray beam research carried out at ESRF also showed that chromium 3 was especially prominent in the presence of chemical compounds which contained barium and sulphur.

Based on this observation, the scientists speculate that van Gogh’s technique of blending white and yellow paint might be the cause of the darkening of his yellow paint.

Co-author Koen Janssens commented: “Our next experiments are already in the pipeline.

“Obviously, we want to understand which conditions favour the reduction of chromium, and whether there is any hope to revert pigments to the original state in paintings where it is already taking place.”