What does a 12th-century bronze sculpture from Cambodia have in common with a 15th-century manuscript from Germany?  Both, surprisingly, relate to the story of the Buddha. 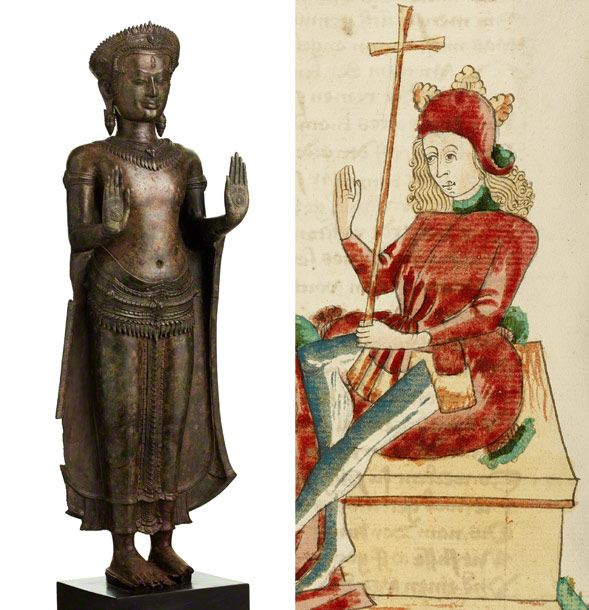 The exhibition Gods of Angkor: Bronzes from the National Museum of Cambodia is displayed in one of the Getty Center’s North Pavilion galleries, near our collection of medieval and Renaissance art. Its location provides a unique opportunity to compare metal sculpture from two very distant cultures at the same historical moment: Khmer works from the 800s to the 1400s sit only a gallery away from our 12th-century French copper sculpture of Christ in Majesty.

The exhibition of medieval manuscripts just across the hall—Stories to Watch: Narrative in Medieval Manuscripts—also contributes to this cross-cultural dialogue, offering evidence for medieval Europe’s exposure to the story of the Buddha, sculptures of whom feature prominently in Gods of Angkor.

In the Middle Ages, the tale of Barlaam and Josaphat was an extremely popular version of the Buddha story told through a Christian lens. The account has been traced from its European translations back to Arabic and eventually to Sanskrit originals, appearing for the first time in Europe in the 11th century. Even the protagonist’s name, Josaphat, derives from the Sanskrit Budhasaf or Bodhisattva, an enlightened being who helps others reach Nirvana.

The story begins as Josaphat, a prince living in India, is cloistered inside the palace because his father, King Avenir, is fearful that his son will be exposed to the troubles of the world—or, worse, will convert to Christianity. Buddha’s story begins similarly.

Numerous events in Josaphat’s story resemble those in the life of the Buddha. For example, when Josaphat leaves the palace for the first time, he encounters a blind man and a beggar, just as the Buddha met with an old person, a sick person, and a corpse on his first forays away from home. Josaphat eventually meets a hermit named Barlaam who converts him to Christianity through parables, a dramatic moment that parallels the Buddha’s attainment of Nirvana. 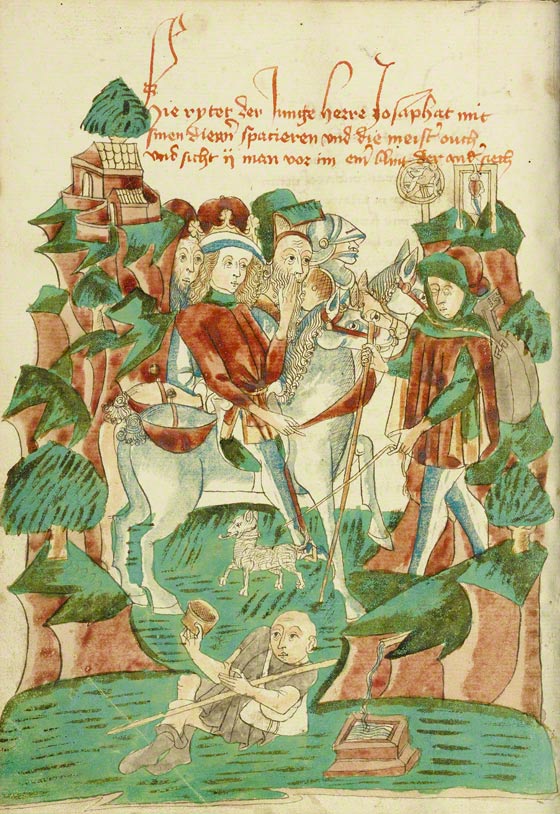 One of these parables, that of the Prodigal Son, is one of the images on view across the way fromGods of Angkor. The prodigal son’s wild living contrasts with Josaphat’s soon-to-be Christian life.  The prodigal son is dressed like Josaphat in the rest of the manuscript, making a stronger connection between the two. As in some accounts of the Buddha’s life, which tell of Buddha’s teaching the dharma to his father, Josaphat is ultimately able to convert his father to Christianity. 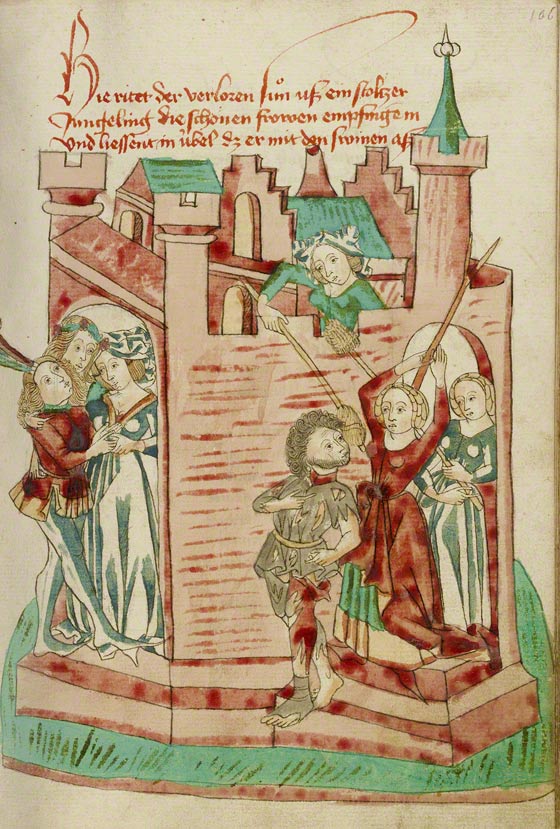 The Prodigal Son at the Brothel in Barlaam and Josaphat. The J. Paul Getty Museum, Ms. Ludwig XV 9, fol. 106

Barlaam and Josaphat is clearly a revision of the Buddha’s story, but it was passed off as a Christian tale throughout Europe.  The story’s titular characters were recognized as saints as early as the 13th century (they are included as saints in The Golden Legend by Jacobus de Voragine, for example). The Getty’s manuscript of Barlaam and Josaphat is the most lavishly illustrated of surviving medieval editions. The images provide a unique glimpse into medieval drawing techniques, with outlined figures colored with brilliant washes. (See more pages from the manuscript here.)

I find the unexpected connection between this medieval manuscript and the Buddhist tradition during the Angkor period fascinating. It reminds me of how small the world really was and is, and confirms the connections that can be found between seemingly different cultures—but just across the hallway.